Finally, the day has come but it was no easy task.

The newly released image of a black hole (below) is a watershed moment for physics. Finally, we can put some of Einstein’s most famous predictions from a century ago to the test, but it was not as easy as pointing a big lens at the M87 galaxy and pressing a button. It took years of work and the collaboration of more than 200 scientists to make it happen. It also required about half a ton of hard drives. 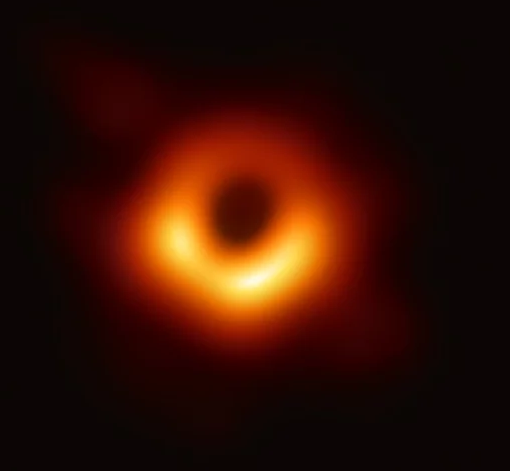 What’s interesting about how the snapshot of the black hole was the length of time it took to put it together. It took years and a network of telescopes from around the world to capture the first real image of the black hole.

Data collection for the historic black hole image began in 2017 with a coordinated effort called the Event Horizon Telescope (EHT). That isn’t a single instrument but rather a collection of seven radio telescopes from around the world. The EHT used a principle called interferometry to combine the capacity of all those telescopes, creating a “virtual” telescope the size of the Earth.

The EHT had to collect a huge volume of data to deliver us this one image. Dan Marrone, Associate Professor of Astronomy at the University of Arizona says the EHT team had to install specialized super-fast data recorders on the various radio telescopes to handle the influx of measurements.

The now-famous image of a black hole comes from data collected over a period of seven days. At the end of that observation, the EHT didn’t have an image — it had a mountain of data.

The data collected was just too massive for the internet to handle. The hard drives had to be flown by plane.

According to Marrone, 5 petabytes is equal to 5,000 years of MP3 audio. There’s simply no way to send that much data efficiently over the internet. It’s faster to actually ship the hard drives to collaborators around the world. That’s why MIT has 1,000 pounds of hard drives sitting in its Haystack Observatory labs.

Thanks to the EHT project, black holes are no longer just illustrations on text books. They are real.

The historic black hole snapshot not only puts to test Einstein’s predictions. It also sheds a new light on the general relativity of black holes.

Another interesting thing about the historic snapshot of the black hole is that it took half a ton of hard drives to store the data collected from the network of telescopes. The role of a hard drive is pretty significant in putting together the first image of the black hole.

What the internet can’t handle, the hard drive can. There’s just no doubt about the importance of hard drives in massive data storage.

That’s why it makes a lot of sense to say that hard drives will always be important in this data era. Considering how important and significant they are in this day and age; they’re still not built to last forever.

Hard drives can crash. When they do, they take the data with them. Data can either be corrupted or deleted.

There are indications that your hard drive is about to crash. Watch out for such indications. For example, is your hard drive making a clicking noise? If it is, then it’s time to seek for some https://www.harddrivefailurerecovery.net/hard-drive-failure-solutions/.

Hard drives will always be synonymous to data storage. If you value your data, you should only rely on the experts to get them back in case your hard drives fail.