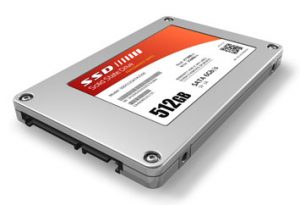 There are a lot of options for backing up your data and getting your computer to operate faster than ever before. There are all kinds of programs, drives and other technical stuff that would take what feels like a hundred years to define and explain.

All you need to take away from this is that Solid State Disks (SSD) are becoming a hugely popular method for running operating systems in place of traditional hard drives, which can fail because of mechanical parts.

Catastrophic hard drive failures are sometimes hard to avoid, whereas sometimes warning is provided via something like a clicking or buzzing sound. (See: http://www.harddrivefailurerecovery.net/is-your-hard-drive-making-a-clicking-noise/ for details.)

Solid state disks, meanwhile are just that: drives without moving parts. In effect, there are no pieces to break off or become worn out. That doesn’t mean they are perfect, of course. Just because something is faster doesn’t necessarily mean it’s always better. There have been a growing numbers of users who find themselves with complete data loss while using SSDs:

Users adopt SSDs at a rapid rate as they see the benefits of speed and reliability, but the employment of SSHD, helium drives and hybrid storage also expands

EPSOM – 1 June, 2016 – According to a recent solid state disk (SSD) technology use survey1 by Kroll Ontrack, the leading provider of data recovery and ediscovery, 92 per cent of nearly 2,000 global respondents are using SSD technology, but a growing number reported experiencing a failure. Of those who experienced failure, nearly two-thirds lost data.

Robin England, senior research and development engineer at Kroll Ontrack, said: “Businesses and consumers continue to move toward SSD technology. Aside from the sheer speed and reliability of solid state drives, prices have decreased to become more competitive with traditional storage. Nevertheless, as our research shows, failures do occur.”

Over one-third of survey respondents (38 per cent) indicated they experienced a failure with SSD, and of those, two-thirds lost data. SSD recoveries at Kroll Ontrack have also become a larger percentage of the full mix of media types on which data recovery is performed.

Robin England added, “While adoption of SSD is up and failure rates between SSD and HDD are consistent, the types of failure are generally different. With hard drives, a bad motor or scratch in the platter can cause failure. Because there are no moving parts in SSDs, general electric failure or wear leveling failure are more common. When failure leads to data loss, it’s not uncommon for IT admins and consumers to utilise data recovery software to attempt recovery, as demonstrated by nearly three-quarters of respondents who took that approach.”

So, let’s just look at that for a minute: Solid State Drives are faster, but offer more cases of complete data loss. Not sure about you, but that’s something an average person might not want to mess with. How fast do you really need your operating system to be? Are you trying to fire up a game that requires an exceptional amount of power? If that’s the case then maybe you should look at upgrading your base computer to something with better specs before you consider SSD drives.

But seriously, these drives are the future. You do have to remember to back SSD units up constantly, and be aware that you don’t want to do things like defragment this type of drive, as they do not need to be defragmented, and such an operation can actually wear the drive out!

Key thought: if you are using an SSD drive, make sure it’s for your operating system only. Use a regular HDD unit for storing files, movies, photos, etc. Understand that the more you write to any SSD drive, the shorter the drive’s lifespan.

Just remember; you’re at risk for losing your data with an SSD, despite outward appearances. But if you’re prepared for this possibility, then you should be alright.