Computing technologies continue to evolve over time. Newer developments showcase faster and better features that promise of many good things to come. The dream of all computer scientists these days is to finally realize the concept of quantum computing. While it remains to be a dream for many, others are working hard on making this dream a reality. It’s not easy, though, as there are many hurdles and the road to greatness isn’t always a straight path. 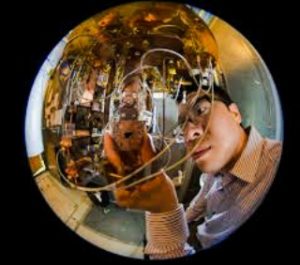 Mankind’s need for higher computing power only continues as the years go by, what with the number of homes with computers, the prevalence of the Internet, and the growing popularity of smart gadgets. If we follow Moore’s Law, computers will reach an atomic scale by the year 2020 or 2030 after doubling its transistor capacity every 18 months since its inception. Once it happens, the next in line would have to be quantum computers. Quantum computing can perform processing and memory tasks using atomic and molecular power, unlike most silicon-based computers we have today.

Google is maintaining its edge in the world of quantum computing. Its 20-qubit processor is currently undergoing tests, and the company appears to be on schedule to have its working 49-qubit chip ready by the end of 2017 as promised. Until it began trialing the 20-qubit chip, Google’s most powerful quantum chip was the 9-qubit effort from 2015.

Traditional computer bits are binary, only existing as either 0 or 1; they’re like light switches that are either on or off. Qubits, on the other hand, can be 0 or 1 like regular bits, but can also have quantum properties that allow them to exist in a superposition where they are both 0 and 1 simultaneously. This makes qubits potentially far more powerful, because instead of figuring something out by trying each option one by one, they can simultaneously compute more than one possibility

Google’s 49-qubit chip will allow them to develop a 49-qubit quantum system that can solve problems that are far beyond the capacity of ordinary computers: Google calls this goal quantum supremacy.

With the way things are going for Google’s current 20-qubit system, they might be able to hit their target of achieving quantum supremacy by the end of this year, 2017. Yes, we’ve all heard the big leagues talk about quantum computing but what’s really in it for us? Well, for now, it’s a technology that does not necessarily best suit the average Joe. However, the advent of quantum computing does not actually mean we will no longer need traditional computers anymore because they’re still mostly what ordinary individuals will be using even when quantum computing debuts.

No company is yet very close to offering up a quantum computer ready to do useful work existing computers can’t. But Google has pledged to commercialize the technology within five years. IBM offers a cloud platform intended as a warmup for a future commercial service that lets developers and researchers play with a prototype chip located in Big Blue’s labs. After a few years of mostly staying quiet, Rigetti is now entering the fray. The company on Tuesday launched its own cloud platform, called Forest, where developers can write code for simulated quantum computers, and some partners get to access the startup’s existing quantum hardware. Rigetti gave WIRED a peek at the new manufacturing facility in Fremont—grandly dubbed Fab-1—that just started making chips for testing at the company’s headquarters in Berkeley.

Aside from Google, other companies also got their eyes fixed on Quantum computing like IBM, Intel, Microsoft, and the lesser-known Rigetti. Not only is the latter a start-up but it’s making significant progress in achieving the quantum leap in computing power after securing sufficient funding for this very purpose. They even launched a new cloud platform, Forest, to help coders practice even before the actual quantum leap takes place. Having coders work on them early on ensures there are apps waiting for the public by the time quantum computers become a reality. The waiting time will be put to good use as people become familiar with the technology before it even becomes a reality.

It’s good to have this type of technology to look forward to in the near future. For now, we’re still stuck with regular computers and chronic computing issues like SSD drive failure and RAID recovery. If you happen to be unfortunate enough to have to deal with these problems, check out https://www.harddrivefailurerecovery.net/the-harsh-realities-of-ssd-drive-failure/ for more information regarding SSD drive failure and https://www.harddrivefailurerecovery.net/raid-recovery/ for RAID recovery. But if you feel you aren’t skilled in working on these problems on your own, we’re just a phone call away. We can fix the problem for you without breaking the bank, you’re welcome.