We are all dependent on data. No matter who we are, we rely on data to make it through the day. Data make the world go around nowadays.

Photographers and videographers need humongous data storage for all their work files. Data storage is an issue they face constantly. That’s why the G-Speed Shuttle with Thunderbolt seems to be the ultimate storage for them. 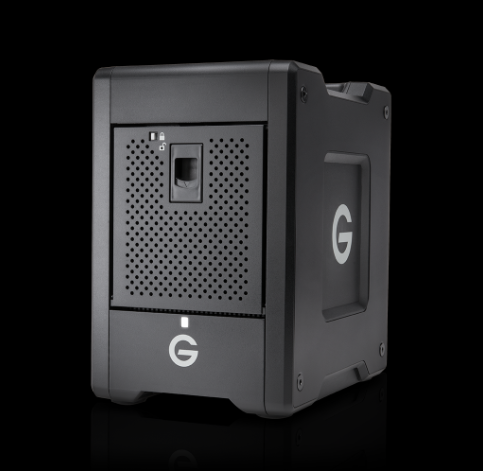 The G-Speed Shuttle with Thunderbolt a very interesting proposition, both for stills photographers and videographers. Yes, it is big, bulky and costly, but it’s as fast as a regular USB-C SSD drive and offers storage capacities you just don’t get with regular external drives.

While it seems to be a costly solution for a huge data storage, it might just be the ultimate data storage photographers and videographers are looking for.

Photographers are always running out of storage space, and there can’t be many of us who don’t need an external drive to supplement the computer’s internal storage.

The traditional choice is to pick an external hard drive, but even the best portable hard drives are pretty slow for bulk image transfers and video editing, and while regular desktop hard drives are faster, even these have their limits. Another option is to invest in SSD (solid state storage) instead, but while this is super-fast, it’s also super-expensive. There is a third option – a desktop RAID system like the G-Technology G-Speed Shuttle.

According to Digitalcameraworld.com, its huge potential storage is ideal for speedy transfer of data and data redundancy. The G-Speed Shuttle with Thunderbolt is also portable, which makes it very convenient for photographers on the go.

If you’re familiar with RAID, then you’re probably intrigued at how such system can fit into one portable hardware. If you’re not familiar with RAID, then it’s time you learn more about it. Since the G-Speed Shuttle is a desktop RAID system, then it’s definitely the kind of data storage that’s worth looking into. A portable RAID system sounds awesome.

RAID stands for Redundant Array of Independent Disks. A RAID drive gets a series of disk drives working together to offer more capacity, higher speeds and data ‘redundancy’ to allow for disk failures. There are different types of RAID setup – the G-Speed Shuttle uses RAID 5, which means your data is safe if one of its four drives fails.

So, since the G-Speed Shuttle runs on RAID, it guarantees some kind of data protection as well. When it comes to storage capacity, here’s what the G-Speed can offer you.

Not surprisingly, RAID systems come in pretty big boxes. These not only have to hold all the disk drives but the power supply and various other data control hardware. The G-Speed Shuttle also needed a driver download for use on our test computer, but that was straightforward.

The G-Technology G-Speed Shuttle comes with drives already installed, so you just need to choose the capacity, which starts at 16TB and goes up to 48TB. If you need more, there’s a larger G-Speed Shuttle XL model with eight drive bays, even faster transfer speeds and capacities from 24TB to 72TB.

The G-Speed Shuttle not only offers data protection and a huge data storage. It also offers portability.

What’s interesting about the G-Speed Shuttle compared to other RAID systems is that it’s portable. It has a carry handle built into the top, so you can take with you for use on location (though you’ll still need access to mains power). It’s pretty big and hefty, but no worse than lugging around a professional flash power unit.

In case you decide to make use of the G-Speed Shuttle, it’s good to know that there are experts who can help you in times of system failures. Data recovery experts can help you out with https://www.harddrivefailurerecovery.net/raid-recovery/ in case something goes wrong. No matter how promising the latest data storage seems to be in the beginning, there’s no doubt that it can fail in the future.