There are many things in this world that are beyond our control. Even if we feel safe and secure inside our homes, the elements can still make us worry when it starts to act up like when it does during natural disasters. We have witnessed time and again how our world turns upside down in the face of an act of nature that is so destructive it not only destroys properties but takes away human and animal lives too. Then, there’s the reality you have to face about your flooded home, broken stuff, etc. that cost a lot to get fixed. Tech devices may be replaceable but they require money too: https://www.harddrivefailurerecovery.net/hard-drive-gets-water-damaged-what-to-do/ and getting one fixed is not always an assurance you can get your precious data back like what you have stored on your computer. What we realized during these dangerous times is that even if we now enjoy lots of tech advancements, there are still many inefficiencies and lacking in times of crisis. Many people still die despite our advanced weather systems. Will we allow this to continue and lose more to nature every time there are extreme weather disturbances? 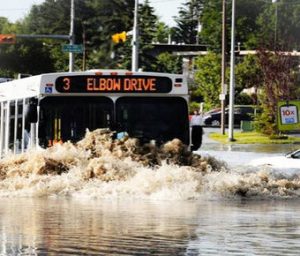 There is a possible solution that is already in place yet rarely used by people in the midst of a disaster: Edge Computing. Edge what? Yes, many are still clueless about this technology, which is probably why it is not utilized to the fullest to lessen the damage caused by a natural weather phenomenon. Basically, edge computing is a way of optimizing cloud computing systems through the processing of data collected at the network’s edge. Without you knowing, edge computing is gradually accelerating digital transformation as it works on data taken from the source and this has become more relevant now with the continued growth of the Internet of Things.

Edge computing and fog networks must be programmed to kick in when the internet fails during disasters, a scientific research team says. That way, emergency managers can draw on impacted civilians’ location data, social networking images and tweets and use them to gain situational awareness of scenes.

Routers, mobile phones and other devices should continue to collect social sensor data during these events, but instead of first attempting to send it through to traditional cloud-based depositories operated by the social network — which are unavailable due to the outage — the geo-distributed devices should divert the data to local edge computing, fog nodes and other hardened resources. Emergency officials can then access it.

It’s “a new way of gathering and sharing information during natural disasters that does not rely on the internet,” Georgia Institute of Technology says in a media release.

Edge computing comes in handy during disasters especially when the Internet or access to it fails because of severe weather disturbances. One way to do this s through the use of data-vacuuming smartphones. It proves helpful in coordinating local disaster relief services by first responders but not yet that useful on a global scale. It can make a whole world of difference if edge computing will be used to the fullest during emergency situations because we all know that every second matter in an emergency. Fire, for instance, can turn things in its path into ashes. If you’re unfortunate to go through such a tragedy, you know how difficult it is to get your digital files back but that does not mean you should no longer try: https://www.harddrivefailurerecovery.net/disaster-recovery-and-recovering-fire-damaged-hard-drives/. Hope it can be of help to salvage whatever data you want back on your fire-damaged hard drives.

Smart cities— where different utilities and services are interconnected via the Internet of Things(IoT) — may be especially beneficial during times of emergency.

Narayan Mandayam, a Distinguished Professor and Chair of Electrical and Computer Engineering at Rutgers University, said by utilizing the IoT to connect different telecommunications platforms and utility services, municipalities can enhance communication between first responders while also handling any potential problems to the water, gas or power services faster.

“A smart city is where every device, every entity and every object can connect wirelessly for whatever the needs,” Mandayam said in a statement. “To make a smart city happen, a tremendous amount of investment in infrastructure will be needed, but the benefits will likely far outweigh the costs. It scares me to think what it would mean for congestion, pollution and quality of life if we don’t start doing things to mitigate them.”

You can see Edge Computing at work in smart cities. While generally few and far in between, these smart cities have proven how reliable and efficient the Internet of Things has been in maintaining a semblance of normalcy and safety in that particular place. It remains a dream for some, though, as building a smart city that can survive any disaster in one piece requires a lot of money especially in the building of infrastructure that is capable of connecting tech gadgets through a wireless system. Perhaps in time, these smart cities will become our reality and save us from the wrath of Mother Nature for real.